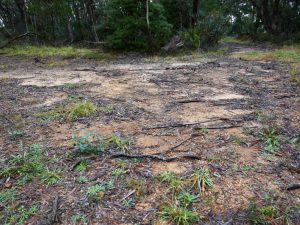 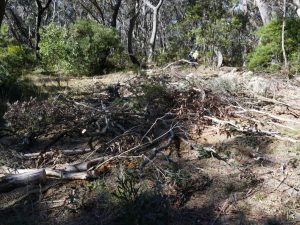 There has been an ongoing problem on the reserve with an access track to the rear of properties in the NW corner.  This became an increasing eyesore,  and a turning circle at the end was becoming larger and larger.  In 2015 after further representations from the Bushcare Group, Council blocked access with a metal chain.

Regeneration along the track is proceeding well, with leaves covering much of it, some Acacias sprouting and Grevillea laurifolia growing in from the sides.  In August Council ripped and brush matted the turning circle to aid this regeneration process.  The group has taken a renewed interest in working on the surrounding area to improve the quality of the bush.

Thanks to Paul Vale for the photos.