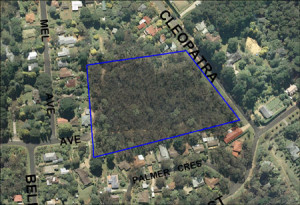 The Reserve has a long history dating from the Centenary of Blackheath Village and School in 1987.

Originally intended as a site for a school, the Centenary Committee petitioned the Government to give the area to the people of Blackheath to celebrate their Centenary. Towards the close of celebrations  on 16 April 1987, Mr Bob Debus, as State Member for the Blue Mountains, announced the release of the new park for the citizens of Blackheath (Blue Mountains Gazette Vol 24 No 16). It was to be called Blackheath Centenary Reserve and was to be kept in its natural state under the control of the Blue Mountains City Council.

The Reserve lies on the divide between Braeside and Popes Glen Creeks and is in the Grose River Catchment. For some years before 1987, it was heavily slashed for bushfire prevention, but still retained a nucleus of good bushland, with a variety of plant species, including grass trees, waratahs and persoonias. The slashing had given rise to a strong growth of gorse and broom of two metres or more in height. Other garden weeds, such as montbretia, agapanthus and ivy, had been dumped on the site.

On reading about this new Reserve, Joyce Brister, who owned a property nearby in Leichhardt Street, suggested to the Committee that the Reserve was an ideal subject for bush regeneration. During her study of native plants, Joyce had been involved with teams of bush regenerators working in the Kuringai area of Sydney, where a good deal of pioneering work was being carried out by the local Council. Consequently, Joyce was asked to join the Committee and to prepare a two-year regeneration programme for the Blackheath Centenary Reserve. On 8 September 1987, Bill Hume and Jack Burrows met Elva McKenzie (Secretary of the Committee) and Joyce on site to discuss future plans, some of which have been achieved. 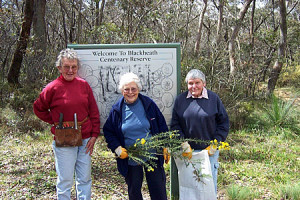 Weeding groups were organised with local members of the community, the local Cubs being particularly active. Six to eight workers attended monthly with their own gloves and tools and with Joyce’s guidance, they set to work to remove piles of Gorse and Broom, which was later collected from the site by Blue Mountains City Council.

In April 1988, Joyce submitted an environmental description and schemes for bush regeneration and bushfire prevention, together with a plant list to the Committee. The surrounding residents were later notified of events and advised of the granting of $7,000 from the Centenary Funds and also $5,000 from the Council for the purpose of fencing , paths and beautification of entrances, etc (letter to residents 24 May 1989).

For the first seven years, the weeding was carried out by groups of local citizens and was showing progress. In 1994, a Bushcare Committee was registered with the Council Bushcare Officer, Virginia Bear. The Secretary of the Group at that time was Kerry Kirk.

From then on, any materials needed were supplied by the Council and in the year 2000, Bushcare Officer, Soren Mortensen presented a new strategy for the site. Using the money in hand and from a government grant, more than twenty large pine trees were felled under the supervision of Eric Mahony, Bushland Officer at the time and this radically altered the nature of the native plant growth in some areas.

The original plants of gorse and broom have left their legacy of seedlings, which will require constant removal in the future, but are now under control. Other garden weeds still persist, but the whole area has undergone a substantial amount of regeneration. 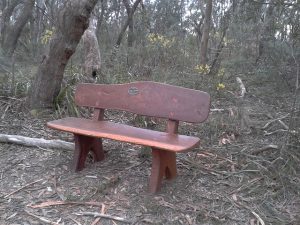 Joyce Brister was coordinator for over 20 years until her sudden death in 2010. A seat has been installed in the reserve in memory of her and Joan Storey another long-time member of the group. 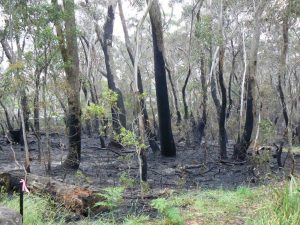 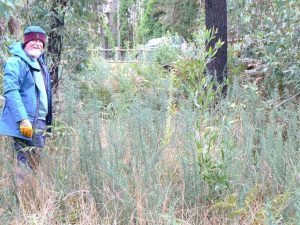 In 2011 Council advised that a hazard reduction burn would be carried out in the southern part of the reserve so Lyndal Sullivan as Bushcare Team Leader proposed a study of the effects of the burn on the flora, particularly on the seedbank of gorse and broom remaining on the reserve. This was taken up by Paul Vale with the assistance of Keith Brister and  involved surveys of six 20m quadrats, 3 burnt and 3 unburnt before and after the burn. Expert assistance was provided by Kate Hammill, Don Cameron and Meredith Brownhill. As expected 1000’s of gorse seedlings came up in some parts of the reserve, but the central area regenerated well with little weed growth. The gorse outbreak has been brought under control.

(Original text by Joyce Brister and edited and updated by the Blackheath Centenary Reserve Bushcare Group.)